I never thought I’d see this day. In 2003 Sega of Japan released a remake of the Sega Master System Phantasy Star for the Play Station 2. The full title of the remake is Sega Ages 2500 Phantasy Star Generation 1. It offered beautifully remade graphics and music as well as including new content and a much more developed and detailed story. Unfortunately the planned English version of this release was canceled not long after it’s announcement and I was crushed.

Over the years there has been a lot of talk about translating this game and even though I have known of (and greatly enjoyed) the Phantasy Star Cave I didn’t find about this until I stumbled onto a fellow wordpress blogger at The Sega Source and this Sega Source post.

Thanks to the Kyence an incredibly motivated Phantasy Star fan all of us can now enjoy this release in English.

If you have any interest (and you should 🙂 ) head over to the Phantasy Star Cave for details on a Playstion 2 emulator and the translated Phantasy Star Generation 1.

Below are two screen shots taken from the Phantasy Star Cave showing off the English translation in action. 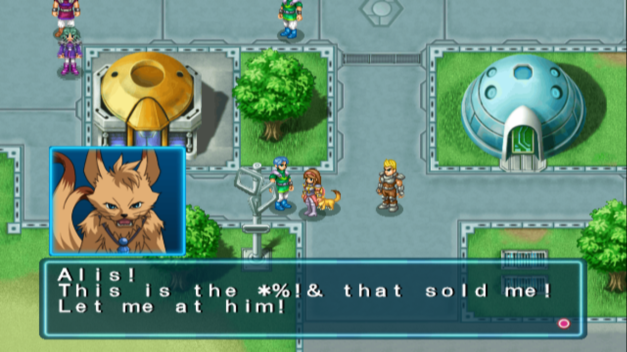 For those who are familiar with the original Phantasy Star; in one short sentence you can see the staggering differences in this remake. Both in the dialog and the graphics.

I know I’m biased but the game looks great. I feel very fortunate to have one of my all time favorites remade like this. It’s been about 10 years since the Japanese remake came out and I can still hardly believe that this English translation is real. Thank you Kyence!

A little more of this wonderful translation and showing off more depth even from NPCs.

Kyence posted an excellent video shown below.  In it he describes what he did and is essentially giving us a behind the scenes look at this project. After watching this video it’s clear that this was a very challenging task for many reasons.

In addition Kyence has an other video called PSG1 Translation – Myau & Odin which was also an enjoyable and insightful watch.

Phantasy Star G1 now in English thanks to Kyence. Thank you!

I thought my beloved Phantasy Star adventure was long over… Here’s to a new beginning.