For a long time now (years) I’ve been very close to buying a Japanese Mega Drive game called Blue Almanac. I never knew anything about it other than it’s a Japanese RPG that I would not be able to play. But the cover art always caught my eye. It looks cool and I think it’s a Sci Fi RPG; which is also very cool and much less common than the typical Fantasy RPG (which I also love :)).

By chance a month (or several) ago I noticed a game called Beggar Prince on ebay. I had never heard of it before so I Googled it. It didn’t take too long to discover Super Fighter Team. This team has been developing classic videos games and have already released two games for the Sega Genesis: Beggar Prince and Legend of Wukong.

I emailed Super Fight Team and asked if they would be selling Beggar Prince again (which was no longer for sale). I didn’t get a very definitive answer. But it seems to me that it is a possibility; although I suspect it’s slim. Below is the email response I received:

Hello.
Thank you for your interest in Beggar Prince. Should we decide to produce additional copies of the game, you will be notified.
Have a nice day.
—
– Brandon Cobb
President, Super Fighter Team
E-mail: bcobb@superfighter.com
Web: http://www.superfighter.com
Facebook: http://www.facebook.com/superfighterteam
“Never let dreams die!”

I sent the email request because the prices for Beggar Prince on ebay were wildly high and I knew I’d never end up with a copy if that was my only option. But at the time I was still able to order Legend of Wukong. With shipping it cost me $60 USD. It’s a lot of money for a 16-bit retro game but it’s new and I really like the idea of supporting people who are bringing us new games for the Genesis. The bottom line is I am very happy with Super Fighter Team and I’ll be keeping a close eye on their releases!

Now, back to Blue Almanac… Super Fighter Team is actually in the process of translating this game into English.
It’s English title  is Star Odyssey and I was quick to join their mailing list for the release announcement for this game. I’ll be ordering Star Odyssey it as soon as it’s available.

Below are some images of marketing material from back in the day as well as cover art for the upcoming release. I believe this was a planned release that never saw the light of day for whatever reason: 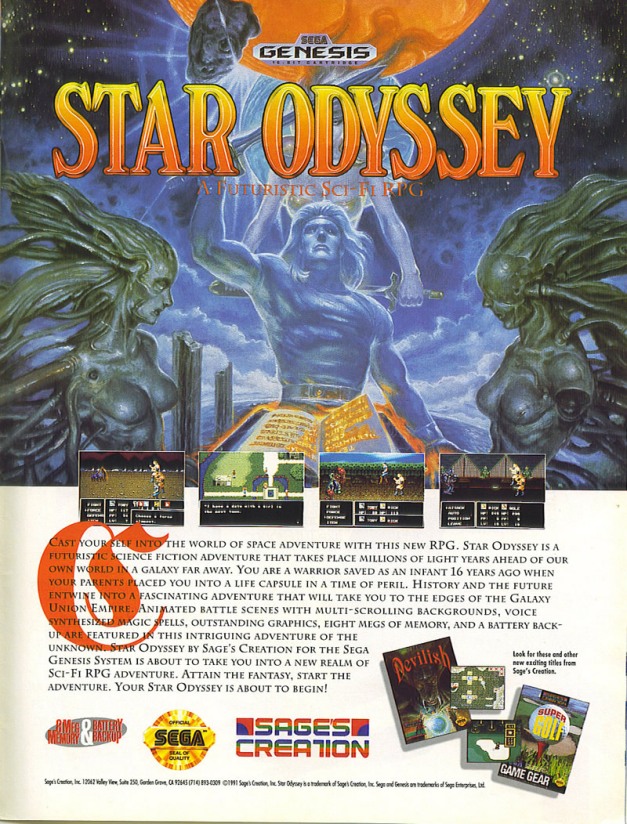 And a link for some screens shots of this cool looking Sci Fi RPG!