I received some excellent new addition recently.
Golden Axe has always been one of the better games for the Genesis and it’s one that I never got tired of playing. I’ve read that Golden Axe 3 was not considered as good as Golden Axe 1 or 2 but for me I really wanted to complete the set. This copy that I now have is like new and even though I can’t play it on my North American Genesis I’m still really pleased to have it. This is one of those games that I was willing to pay a bit more, $42 including shipping and from watching it for a while I don’t think I could have done it for much less and in such great condition.
Having never played Alien Storm I was interested in it because I heard of it being compared to Golden Axe quite often. So even though a sci-fi theme it still has three unique characters to chose from and had the same style game play. The manual is a little bent in spots but over all the condition is very good. This one’s cost was much more normal and set me back $12 with shipping.
I really like Ys for the Sega Master and I wanted to add the Genesis version (Y’s III) to the collection. The game play doesn’t look that great but I’ll give a go some day and decide then. I ended up buying this from an ebay seller who did not ship to Canada. He was willing to cancel the order but I left bad for over looking the shipping details and wasting some of his time. I offered to pay for additional shipping cost to seal this deal. In the end I ended up paying much more than I originally wanted to. $29 including $12 in shipping costs. 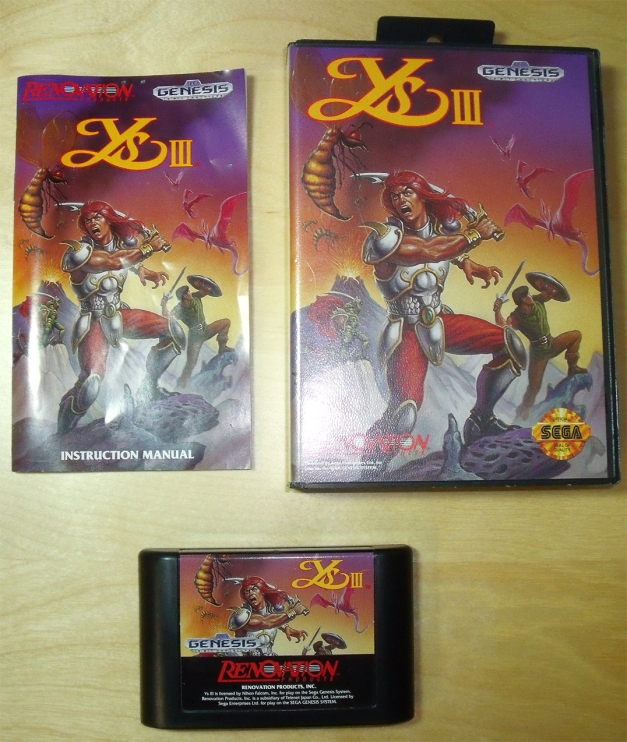