I believe this will be the fourth time Nintendo Joe and I will be trekking over to the neighboring city of Waterloo for the Waterloo Video Game Swap this coming March 29th. And it will be the third time we’ve rented a table (for $40) in order to peddle our wares.

I am more experienced at selling now and I have done a better job labeling my stuff this time and I think I’ve priced my games very low. However, I am a bit concerned that there may not be much interest in Japanese Mega Drive games; which I have a lot of.

The first time we went I did manage to sell a fair amount of games but it really did feel like a lot of inventory also came back home. I’m not really a seller/vendor I just have a lot of doubles that have built up from over these many years of collecting. I think I started collecting in 1999! Sega games were cheap back then!! 😀

This time around no game is selling for more than $20 and many are priced at $5 and $10. Some will sell, I’m sure of it. Hopefully lots will sell! 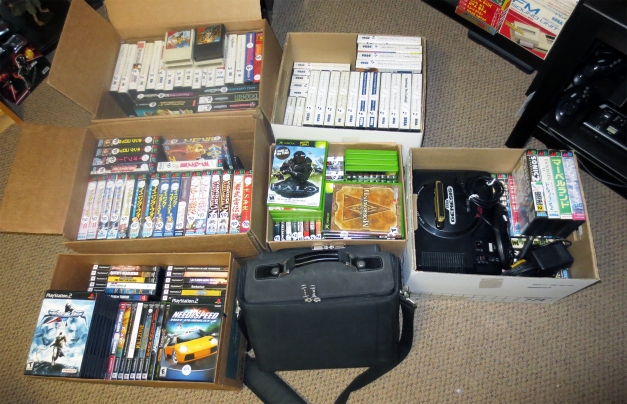 Lots to sell! How much will be coming back home?

Here’s my previous post showing what I brought with me on our first visit to the Waterloo Video Game Swap.

So far I’ve priced all of the Sega Master System, Sega Mega Drive, Sega Genesis and Xbox Original games. I only just now found that box of PS2 games (bottom left)… it’s like retro video games multiply in the closet if left too long.

That black bag is an official Xbox original carrying case with an excellent condition Xbox original console in perfect working order complete with two joysticks and all cables. I’m not sure yet what to list if for.

This time our good buddy and comic book artist EvilKalman cannot join us because he’s busy writing and drawing the re-invented Captain Canuck! Instead Flavio (who doesn’t even need an online nickname to sound cool) will be tagging along.
Flavio will actually be big competition for me! He’ll have tons of Sega Master System games for sale in addition to NES and others. I’m not really worried about his massive inventory because I know it will be a fun day regardless.

This promotional video does a good job showing what the event will be like. Nothing fancy but there will be colossal amounts of Retro Goodness:

I’ll post again when the deed is done and we’ll see what happens!