This is my new SegaScope 3-D System. It’s one of three different Sega Master System bundles that I remember seeing in Canada back when the system was new. It was the least common and carried the highest price tag because it includes Sega’s very cool (but under used) 3D Glasses.

The only time I’ve ever seen any SegaSCope 3-D bundle in person (since the 80’s) is on display at retro video game shops. And often on those few encounters the box was roughed up and/or empty.

So I was surprised when I found it locally but not surprised by the high asking price.

I actually wanted to offer $200 but if the seller was willing I’m sure it would have sold very quickly at that price. I felt an additional $100 was needed in order to stand any kind of a chance.

After several weeks I made my offer again and the seller wanted to meet me at $400. But for me personally even $300 (~$227 USD) felt like a lot of money so I stuck to my price and eventually he agreed.

The next challenge was dealing with three hours of driving to get it. But when I took a closer look at the sellers location I realized that a very close friend lives in the area. I called him and he was willing to drop everything and head over to meet up and make the exchange. He even spotted me the $300. That’s a sign of an exceptionally good friend. Next time we got together I received my pricey but very cool SegaScope 3-D System bundle.

It’s almost complete. With the exception of the power supply everything appears to be included. Not visible and sitting behind the 3-D Glasses adapter are the coaxial and VHF adapters. All of the hardware is in excellent shape and is in perfect working order. 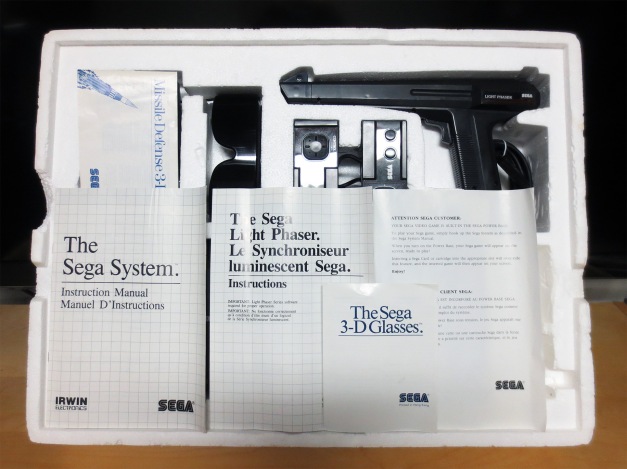 I don’t know for certain what originally came with the system but there is a manual for each component and for the built in Missile Defense 3-D game. The Styrofoam is not in perfect shape but it’s whole enough and I believe a Styrofoam cover is missing. 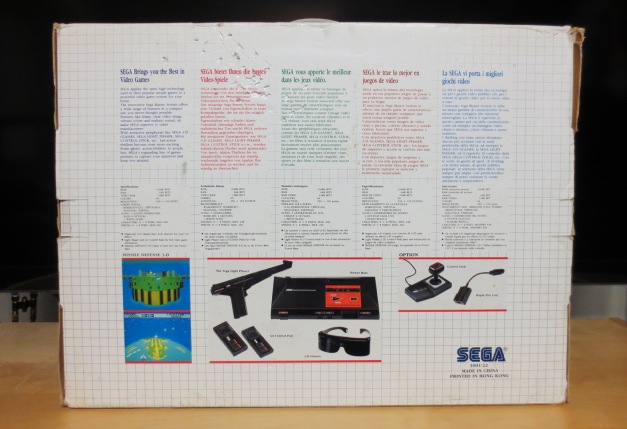 The back and the sides of the box have the worst of the damage. There is a cluster of puncher marks on the back near the top and the flaps on the sides are well used and torn in places.

However, it displays very well and it’s really the best condition SegaScope 3-D System that I’ve ever seen in person so I’m pleased that it’s mine.

I will admit that I still feel a little conflicted on how much I spent on this sucker. The other two boxed Sega Master Systems cost me ~$40 CAD (I think; it was decades ago) and $100 CAD for the Hang-On/Safari Hunt version.