About six months ago I discovered a user on the forums at neo-geo.com by the handle shadowkn55 who makes very high quality replacement labels for Neo Geo MVS cartridges. At that time I purchased eleven label which really improved the look of those games. All those details can be seen here.

More recently I purchased another batch of labels and I’ve managed to clean four carts and apply the new stickers. And again the transformation is awesome. 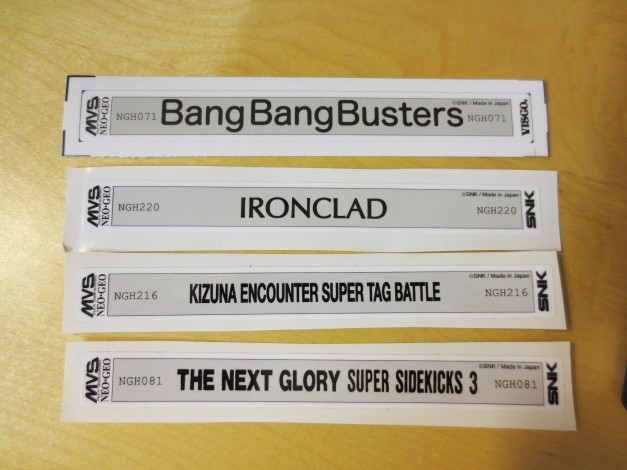 Above are brand new reproduction labels for Bang Bang Busters, Ironclad, Kizuna Encounter and Super Sidekicks 3. When you see the images below you’ll know why I decided the original labels had to go. 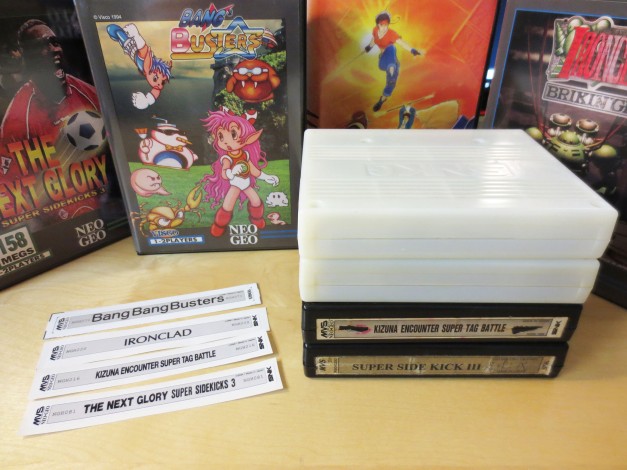 The new and the old. 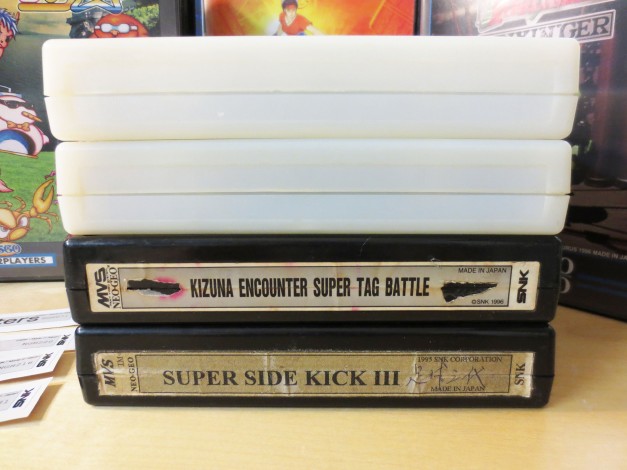 For starters both Bang Bang Busters and Ironclad are games that were originally developed for the Neo Geo but never actually got released. It was only later when the ROMs were found in the wild that people started putting the games on cartridges. Which is why these two games didn’t have any labels at all.

Bang Bang Busters is an excellent game that is very similar to Snow Brothers. Ironclad is also a good game and is very similar to R-Type; complete with charged shot and a detachable pod. I haven’t beaten these games but they feel very complete and polished. They are really nice additions to my Neo Geo collection.

On the Kizuna Encounter label you can see two tears; one tear to the left of the title and one to the right. Originally the sale SNK game cartridges were restricted to a particular region and the carts could be tracked by their serial numbers. So if someone who purchased a game later wanted to sell it they would often remove the serial number so that SNK could not track the cart back to them. Seeing two tears like this is pretty common on Neo Geo MVS carts.

The label on Super Sidekicks 3 looks like it might have already been a reproduction. It did not have rounded corners, seemed to be thinner paper and was matt like regular paper (That’s just a guess). That suspicion combined with how beat up the label was made it easy for me to decide to replace it. 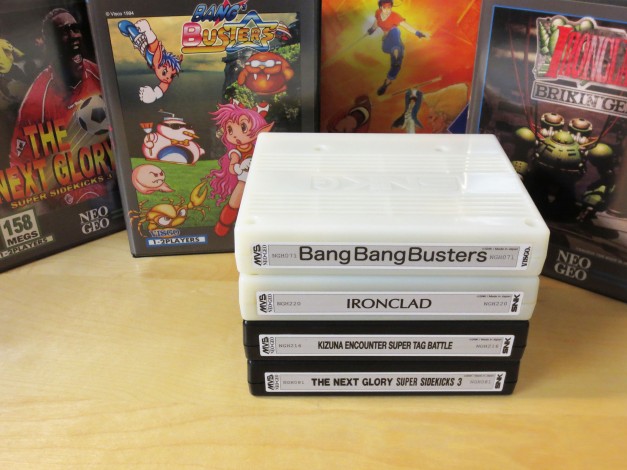 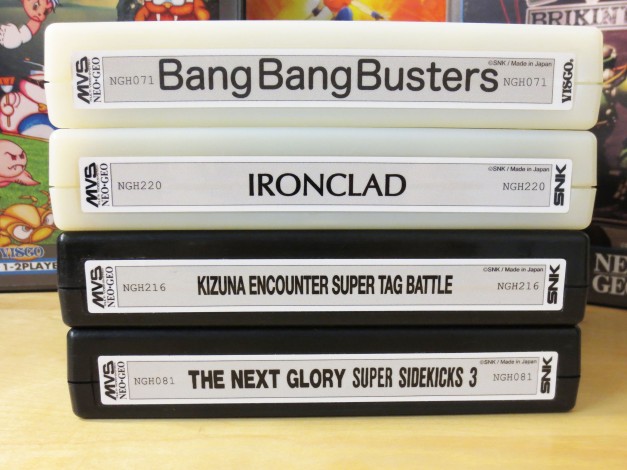 Above is the final product. I love it. They look fantastic. I’m always a little conflicted when altering an original product but I feel the two labels I removed here were beat up enough to warrant the reproduction labels.

For a good long while now I’ve found a very nice distraction in playing and collection games for the Neo Geo MVS.

**Disclamer** I hope you’re immune to ‘drawn-out’ and boring… because I’m about to get real wordy.

For anyone not familiar with the Neo Geo there are two primary flavors of the original hardware.
Neo Geo MVS stands for Neo Geo Multi Video System (MVS). This is the version found in the arcades (throughout the 90’s mostly) in a classic 225lbs upright cabinet. Many Neo Geo arcade cabinets could support more than one game at a time. Either 2, 4 or 6. Allowing a player to select one of the installed cartridges(games) to play. There is also a version of Neo Geo arcade cabinet that can hold only one game at a time which was instead called Neo Geo System. 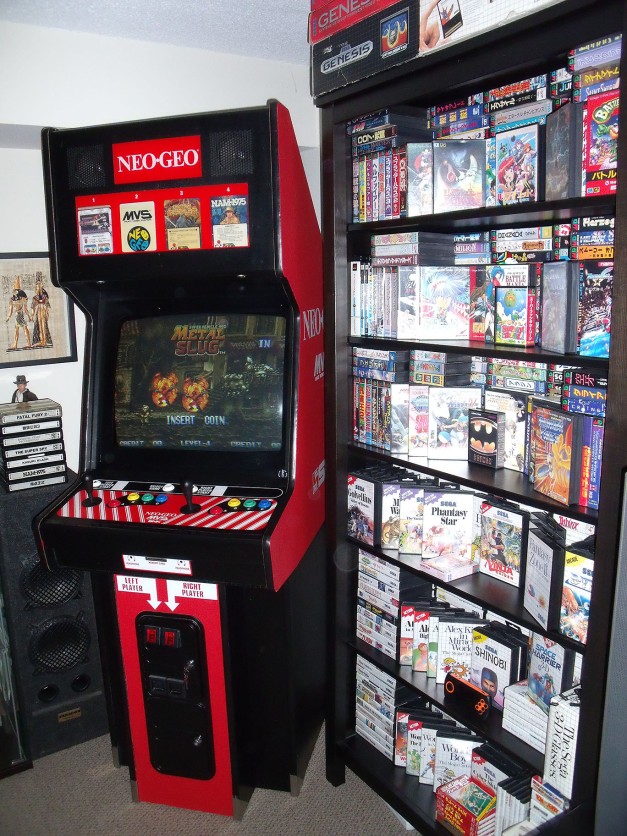 Shortly after the release of the Neo Geo MVS came the Neo Geo AES; which stands for Advanced Entertainment System. This version is the in the form of a classic video game console that plugs into your home television. The hardware and games are identical. The AES will play the exact same games with the same performance as the arcade MVS systems. 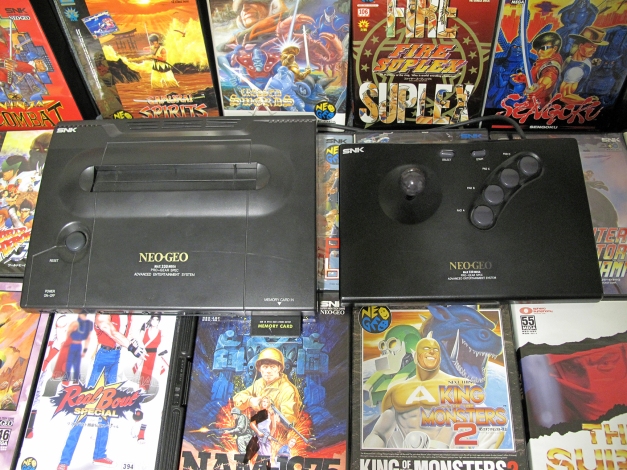 This was my Neo Geo AES before I sold it. I still miss it!

I decided to switch from collecting AES game to MVS games because MVS carts are so much cheaper. They’re still not cheap but with very few exceptions MVS carts are a good magnitude cheaper than AES carts.
And you can bring the price down a little bit more if you’re willing to purchase nasty beat up carts; which are sometimes referred to as ‘gamer condition’ carts.

And that is exactly what I do. Check out the image below… NASSSTTTYYY!! 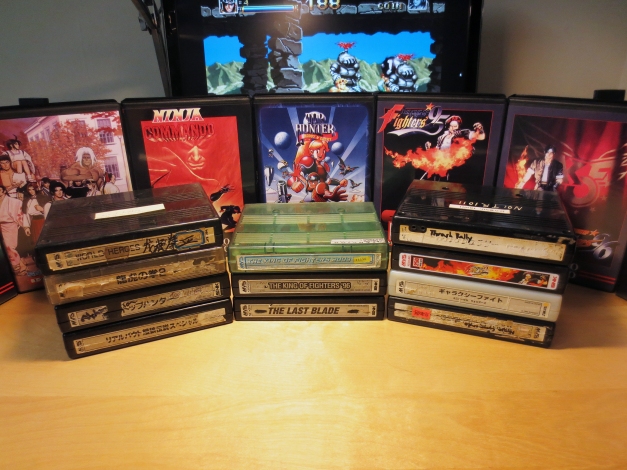 The games work perfectly but the plastics are scratched, marked and dirty. And the labels are in worse shape. Some you can’t even read anymore and Art of Fighting Path of the Warrior is actually labeled incorrectly as World Heroes (Top left). But saving anywhere from $20-$40 USD (or more) per game I feel is worth it. 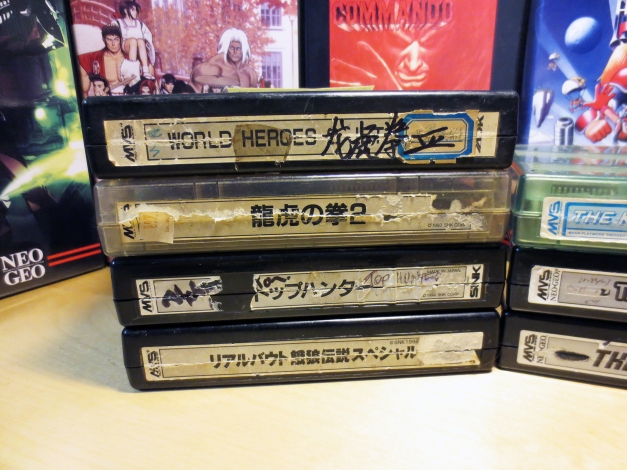 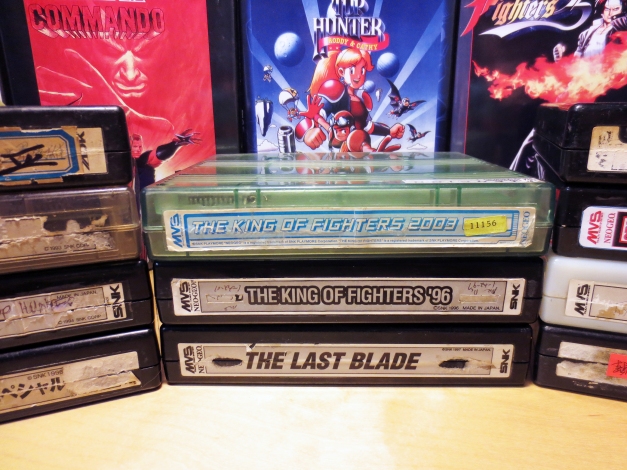 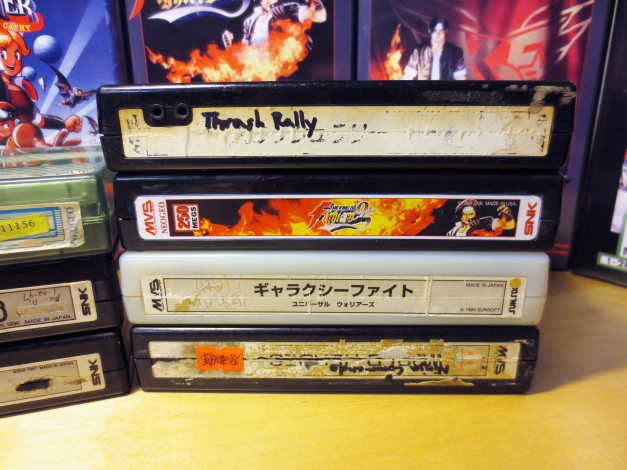 As I continued to collect Neo Geo games I discovered shadowkn55 over on the neo-geo.com forums who sells beautiful reproduction labels for $1 USD each. Not only are these labels brand new but they look just like the original MVS labels. The quality is perfect. 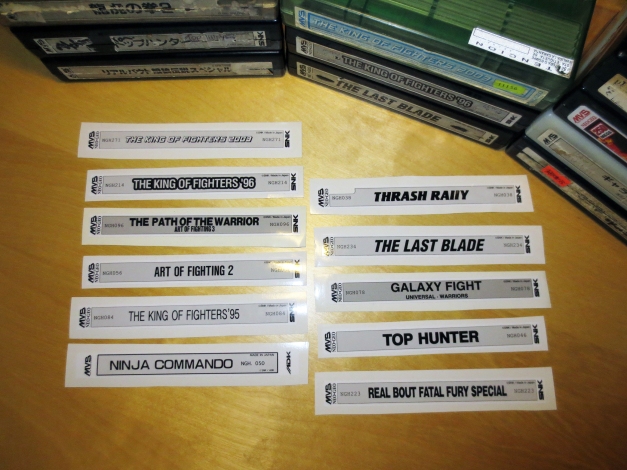 Now I have a way to restore these carts into reasonably good condition.

But I do have a few reservations. After spending some time on the neo-geo.com forums I’ve learned that a lot of people really want to keep these carts stock and not change them in any way. I understand this point of view and I feel it has merit. The three games in the middle (The Last Blade, KOF96 and KOF2003) have labels that are not terrible. They’re not good but they’re mostly whole and I can still read them easily.
Should they have been replaced or should I have left them alone?

As it turns out I did feel it was better to replace them. And I think they are looking very nice. But this is something I keep in mind when I buy new labels. I want to be sure the cart really needs a replacement. Because I would prefer to have an original label if possible.

It took a lot of effort to remove most of the old labels. I must have spent 10 minutes scratching at each one with my thumb nail. Once the paper was mostly gone I found that rubbing a little bit of WD-40 where the label was did a great job at removing the left over residue. 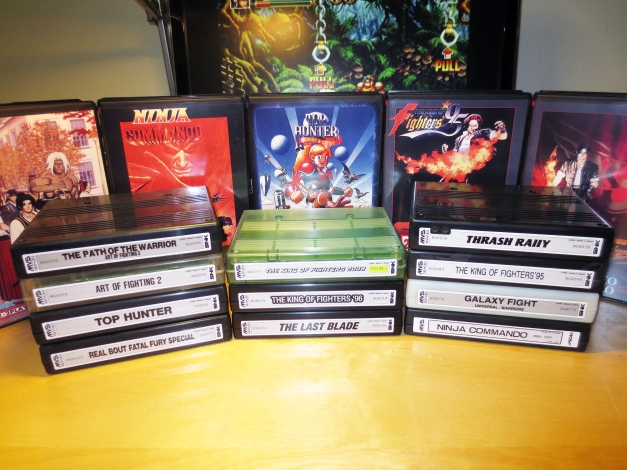 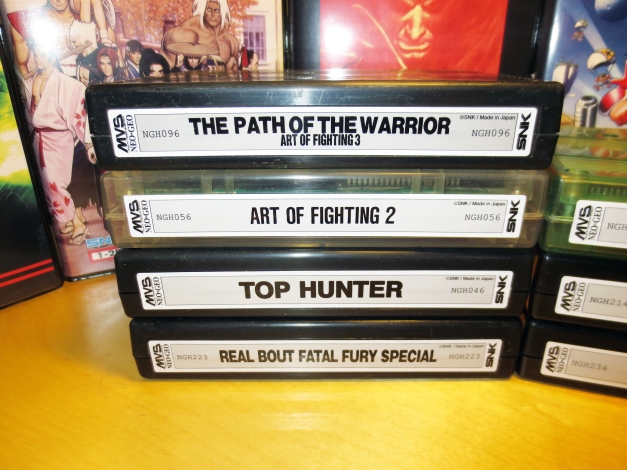 Close up of New Labels. 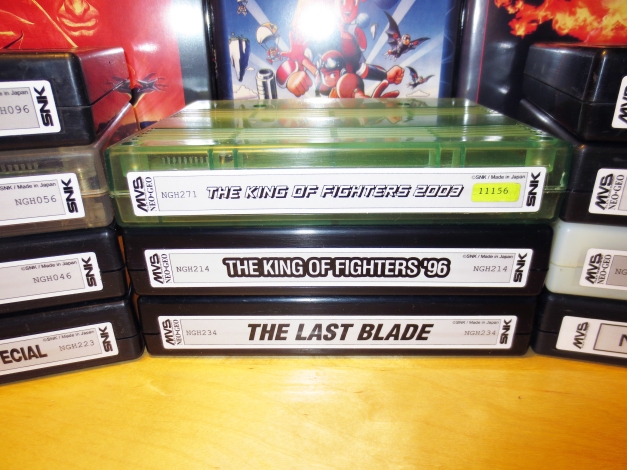 **As it turns out the King of the Fighters 2003 is actually a bootleg version and not authentic. Thanks to a fellow gamer who commented below about this. I’ve since sold this boot for $25 and I got myself an authentic version to replace it.** 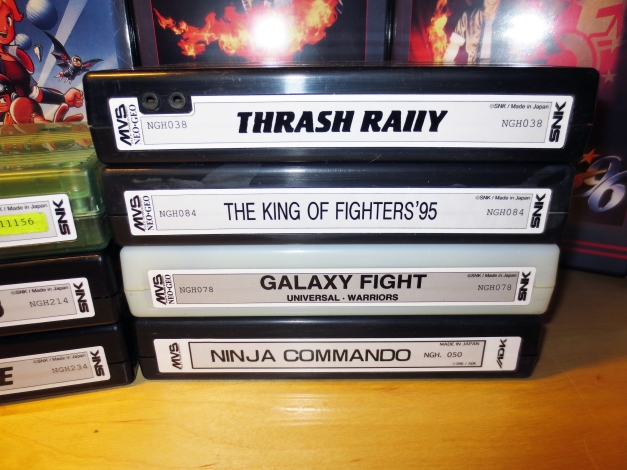 I think they look great and I’m very happy I did this. For this selection of games only one had a serial number on the cart. And I saved that challenge for last.
You can see that The King of the Fighters 2003 (Top Center) had a small yellow sticker on the original label with it’s serial number. Normally serial numbers are a part of the label just like the title but SNK was very inconsistent and you’ll see them doing many different things with their carts.
This time it worked out very well for me. I was able to use a blow drier to heat and cleanly remove the yellow serial number sticker and apply it to the reproduction label. This allowed me to preserve the serial number instead of losing it. *I wish I had thought of using the blow dryer sooner on every label and not just this serial number sticker. **And it’s a bootleg… ah, wasted effort!**

Not all Neo Geo MVS carts had a serial number but if they do it will only ever appear on the cart label and the original cardboard box that it came in.
Click here for an example of a complete MVS kit with matching serial numbers on both the cart label and on the box label.
SNK also used many different colored carts for their games. Not only will you find color changes from title to title but it’s probable that a single title can be found in several different colors. The same is true for cart labels. Most often they are black and white but sometimes you’ll see colored labels and other variations.

Since I was completely removing the old labels I took the time to open the cartridge, remove the two PCBs (Printed Circuit Board) and I completely washed the plastic cart with soap and water. Before applying the new label this would be my only chance to give the cart a very thorough cleaning. Most of them really needed it. Twenty years worth of dust and grime really shows! This cleaning didn’t help the existing scuffs and scratches that are very common on gamer condition cartridges but the cleaning was still very worth while. 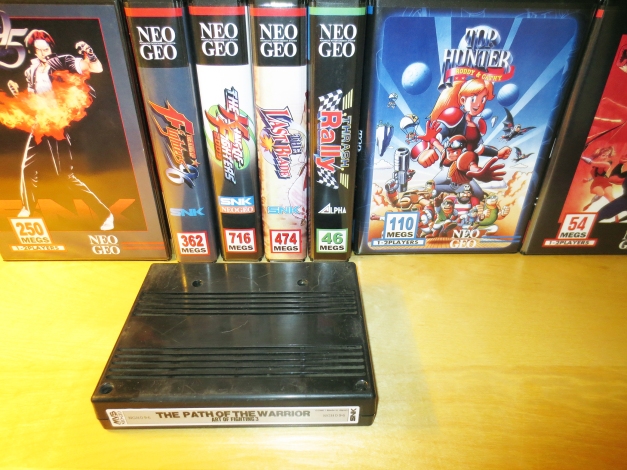 Check out these excellent after market storage boxes called Shockboxes.

Now that I have applied these perfect and very authentic looking reproduction labels to each of the carts it’s time to hide this fine work inside some beautiful looking storage boxes called Shockboxes; sold by Southtown Homebrew. You can buy these snapcases in various colors (I always choose black) and you can also purchase a Neo Geo MVS cover sleeve/insert to go with the case.

These Shockboxes are a dream come true for collectors like myself. They give a way to display Neo Geo MVS games and make them look really good. The downside is they are not cheap. Each Shockbox with an insert has cost me about $15 CAD each after shipping. I still need about 20 more but I’ll just have to wait until I can afford them. The current strength of the US dollar to the Canadian really isn’t helping my cause at all!

I sometimes surprise myself at how busy I can keep with my video game collection by doing stuff like this; let alone the time spent playing them. There is a lot of unexpected diversity to this hobby.