ProjectY is the code name of the Beat’em Up video game currently being created by Watermelon Team for play on the Sega Genesis / Mega Drive.

There haven’t been many recent updates for ProjectY and this post ain’t much of an update but it is proof of life!

I recently received an email from Watermelon and in this email they included the following tiny glimpses into the upcoming ProjectY.

The screenshots below shows a few still frames of animation for one of the baddies for ProjectY. The pixel art is excellent. In fact it’s beyond excellent. I feel very confident about the quality of this game and I’m very excited to get my hands on it! 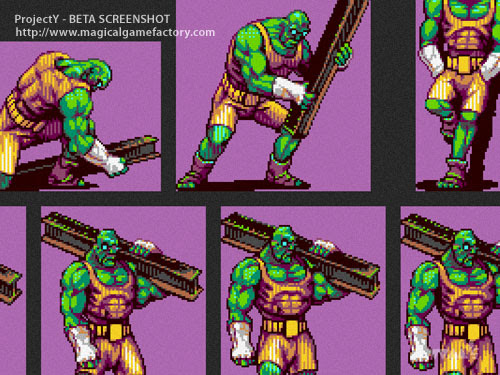 Wha… What’s he going to do with that I-Beam?…

The intent of Watermelon’s email was to verify details of early investors to ensure that a cool little treat would be correctly included in the game.

I would have loved to name my bad guy SEGADUDE but for (I assume) technical reasons the name length of bad guys in the game is limited to six characters. SEGADU just doesn’t have the same impatct so I went with HEIN (Another nickname of mine).

Showing Investors which characters are valid for naming a bad guy.

The screenshot above was used to show investors what characters they can use in the six character name they pick to be applied to a bad guy in the game.
But beyond this we get a small glimpse into the game. There’s not enough to really be sure what we’re looking at but again the pixel art is really well done. The image has depth and shading as well as some elements looking worn or used; like the dirt and marks on the platform and the grease coming from the small vent on the bottom right.
What are we looking at in the picture? My guess is this is some kind of platform. Maybe a moving elevator or tram. “MIND THE GAP !!!” written on the very bottom is a good clue to suggest something like that.

No investor actually chooses which character gets their chosen name. Watermelon explained that the names will be applied randomly and these investor names will only been shown in game if you enable the feature before playing.

Not really sure what this is…

The screen shot above is much more of a mystery… Clearly it’s a rough draft of something. I can see the Japanese Mega Drive logo as well as Watermelon’s logo. And what looks like graffiti in a few places. All of the elements appear to be in some kind of image editor.
My guess? These are early drafts of elements to be put into the game or on the packaging or maybe stickers or something to be packaged in the game box.

So someday when we’re finally playing ProjectY and you see HEIN com’in at ya with a beat stick, chain, nun-chucks, or even an I-Beam make sure you give him heck!! 😀

2 comments on “Tiny ProjectY Update – Look out for HEIN!!”