When ‘Oh Mummy Genesis’ was first re-released by 1985 Alternativo in 2012 for the Sega Mega Drive I missed out because I failed at ordering it from their Spanish only site. At that time it would have cost me almost $50 CAD for the game.

More recently I managed to buy it off of ebay for a little under $70 CAD (all in). Being several years after the release I think this price is about as good as I could have done. Typically games similar to this become very expensive on the second hand market.

Despite the case and cartridge being made from very cheap and soft plastic the whole package looks pretty good. The Oh Mummy Genesis case is more similar to what comes with Super Fighter Team games like Legend of Wukong and Star Odyssey than to classic Genesis cases but the Super Fighter Team cases are still much better quality.

And what of the actual game Oh Mummy Genesis? It’s a remake of a very old computer game called ‘Oh Mummy’ for the Amstrad CPC. The game is very simplistic. With the exception of the bonus stages (and pausing the game) you don’t need to use any buttons. You simply navigate your archeologist around the map similar to Pac-Man. The goal in Oh Mummy Genesis is to trace a path around the tombs on the map and find the key that will unlock the next map. The more of the map you uncover the more treasure and points you’ll earn.
In addition to Mummy’s chasing you around the board there are lots of items, environments and other enemy’s that do a great job augmenting the gameplay and help keep everything fresh and interesting. 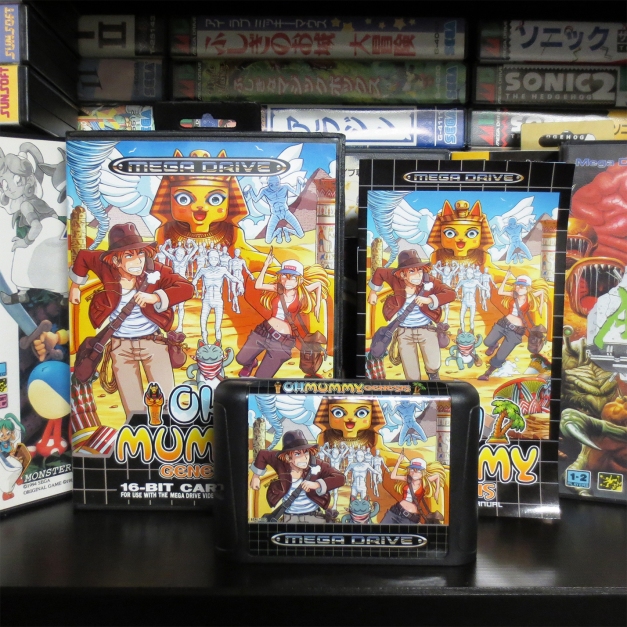 If you’ve ever seen the original Oh Mummy you’ll know that Oh Mummy Genesis has had a serious graphics overhaul. Both the graphics and sounds are very nice and feel appropriate on the Sega Genesis / Mega Drive. The game is fun and addictive.

Is it worth $70 CAD (~$57 USD)? Not really. When I think of what you get from more popular Genesis games like Sonic the Hedgehog, Thunder Force III, Ghouls’n Ghost, Streets of Rage, etc it’s hard for this very old style of game to compete. Personally I feel you’re going to have to be a collector as much as a gamer to make this one worth the money. However, it is a fun game and I do like it.