Trading Games at the Flea Market

I didn’t know it right away but it’s been true for a long time now. I know a guy who knows a guy. Really it’s true.

For some time now I’ve been working hard at selling off all of my extra video games stuff. I had the last of my Sega Master System games on Kijiji along with various other Sega consoles, PS2 games, xbox original games and other misc video game stuff.

I was preparing to visit Nintendo Joe out of town at his cottage when he said to me; “Hey, I know a guy. Bring up your stuff that you’re trying to sell”. So I did. It amounted to about four boxes of video game stuff.

What happened? The short answer is the stack of eight new games for the collection that you see below: 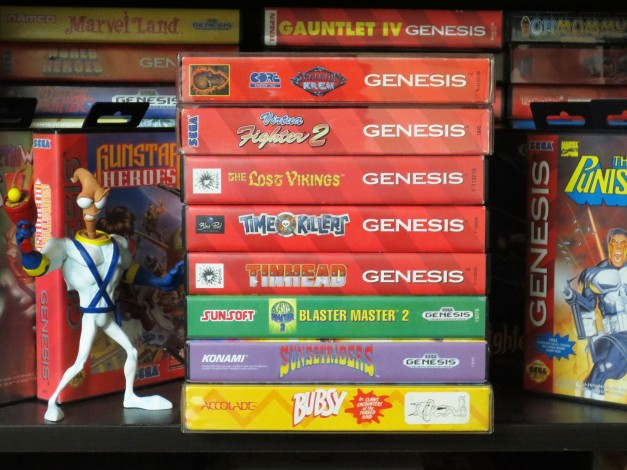 As it turns out Nintendo Joe is really good at finding places out in the wild that sell retro video games. This guy that he found has a store in a Flea Market way out in cottage country that I would have never found on my own… in fact I don’t think I’ll ever be able to find it again without Nintendo Joe. This place feels kind of like the Secret Garden. With any luck Nintendo Joe will comment below detailing the address of this magical place!

I actually traded a lot of stuff for these eight games. I should have written it all down at the time because I’m forgetting a few details but this is what I remember. I traded a working Sega Master System with 10 complete games, a few more boxed SMS games and a few other loose Master System carts. As well about a total of 10 complete PS2 and xbox original games and a bootleg copy of Tetris for the Sega Mega Drive. Nothing was rare, uncommon or particularly valuable. In fact about five of the Master System games were Shanghai (a Mahjong game).

Here’s a picture of the Master System and the complete games. An OK assortment of games for someone just starting out; the most exciting being Space Harrier. I had these pictures only because I was going to post them on Kijiji for sale.

I don’t recall the titles of the PS2 and xbox original games but in my area games for those systems are really hard to sell. On Kijiji I would have tried to sell them for $5 each. The Sega Master System and 11 complete games I think I was going to list them for about $130 as a bundle. So a ballpark estimate of the actual ‘street value’ (I say street value because retro video games are like crack to some of us) would be about $180 CAD (maybe $200).

All of the games I received are in Good or Very Good condition except for Skeleton Krew which has some stickers on it. I want to remove them but they don’t look easy… in particular that giant label on the manual. So first I’ll start with the restoration of Skeleton Krew before we get to the ‘glamour shots’ of all eight games 🙂

Microplay! What have you done?!

I thought it would be easier to start with the cartridge. The front sticker looked like it would be the easiest to remove but there was some risk of damaging the cart label. And the label on the back looked like it is some form of security label but it is stuck to hard plastic and I’m sure I’ll be able to scrub it away.

Son of a B! Right on the label…

Tricky but no label worry about ruining.

I’ve learned that the secret to removing stickers is heat. A hair dryer is an excellent retro video gaming tool. Who knew? 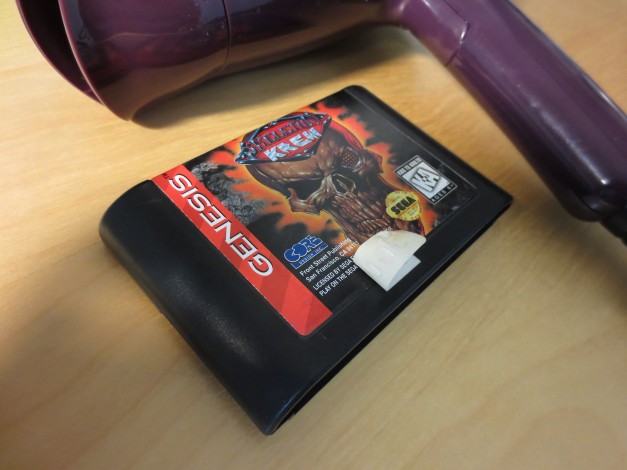 This sticker did not come off clean.

It only took a minute or two to get the front sticker off and the cart was starting to look very nice. As for the back I applied heat and peeled the sticker away as best I could. I then used some WD-40 and rubbed that left over residue until it was completely gone. The cart was not difficult to clean up. One down!

At first I was just going to leave the sticker on the manual. Unlike the hard plastic of the cartridge or the tough high gloss cartridge label the paper manual is much thinner and more delicate. I was worried about the sticker removing color or even ripping the cover. The first image below took me about 15 minutes to get that far. It was slow and boring but it was working. So I kept at it. Once the sticker was gone there was a lot of goo left which I again used WD-40 to clean up. This time I used a very small amount and made to sure to thoroughly wipe away any leftover WD-40. The result is so much better than I thought. It really turned out well. Because the box cover of Skeleton Krew is a bit sun faded I’m going to say the over all condition of this game is Good (instead of Very Good). In my books this is a huge win.

And here’s a final look at all this work. Not bad; not bad at all 🙂 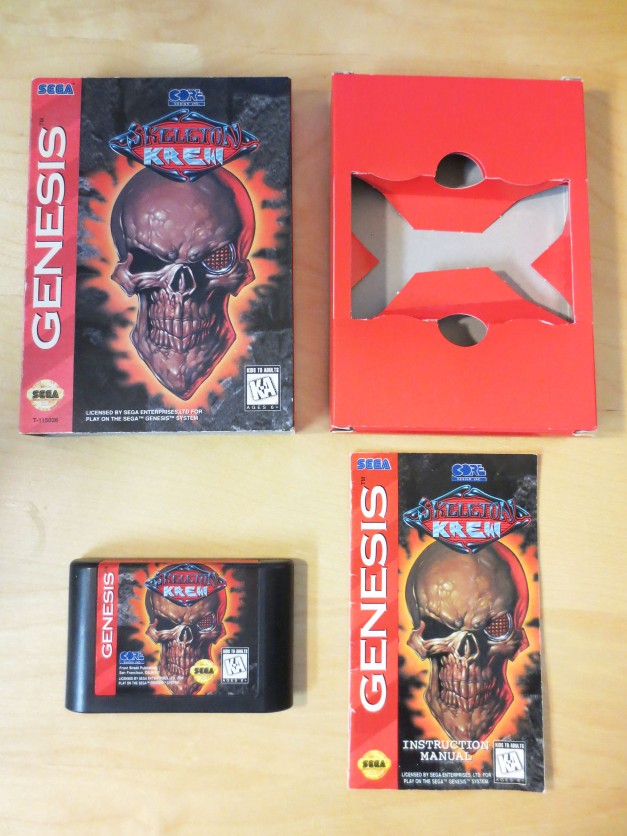 A little more than an hour pealing labels is (somehow) all worth while!

So, what’s left? Ah yes, those glamour shots I promised you. We might as well start with Skeleton Krew. Yeah, it’s pretty much like the image above but more… Glamorous, wouldn’t you say?… No? Well, here it is anyways:

Below is Virtua Fighter 2. It’s almost mint except for some mild sun fade on the case spine. 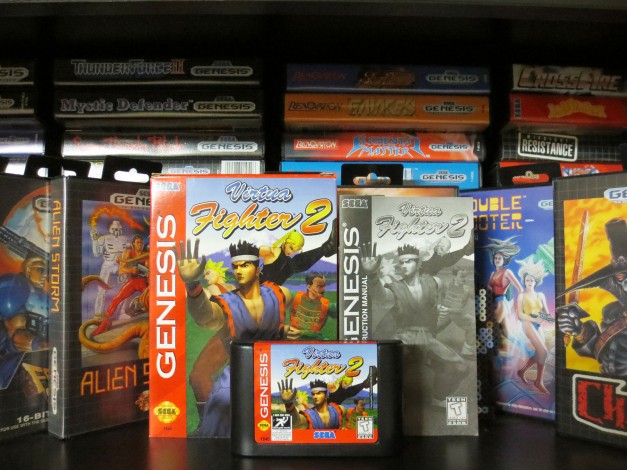 I use to play a lot of The Lost Vikings on the PC a very long time ago. It’s an excellent game and very similar to Trine and Trine 2. The case is not in great shape but everything else is. 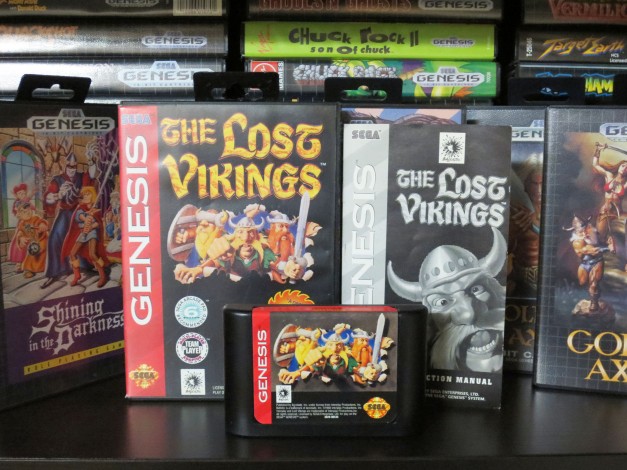 Time Killers is a game I only just learned about this year. At that time I hopped onto ebay to get an idea of how much this game might cost and I was pretty disappointed when I found out. It appears that it’s a harder title to find and sells for $30 CAD loose or $100 CAD and up when complete. I would not have paid that much so it was nice to find it at the Secret Garden Flea Market. It’s in Excellent condition.

Tinhead is a pretty good platformer and for me this was an upgrade. I previously had a beat up copy which was missing the manual.

I’ve wanted Blaster Master 2 for a long time but at about $60-$80 CAD it was also too expensive for me. The game looks really good and the idea of a platformer where you drive around in your vehicle and are able to disembark and walk around is very cool. The game does some really neat things. I have tried it out and it’s hard. I haven’t been able to dig in deep enough for a full fledged verdict but so far so good! Because I was so keen for this title I picked it up even though it’s missing the manual. Otherwise it’s an Excellent shape. 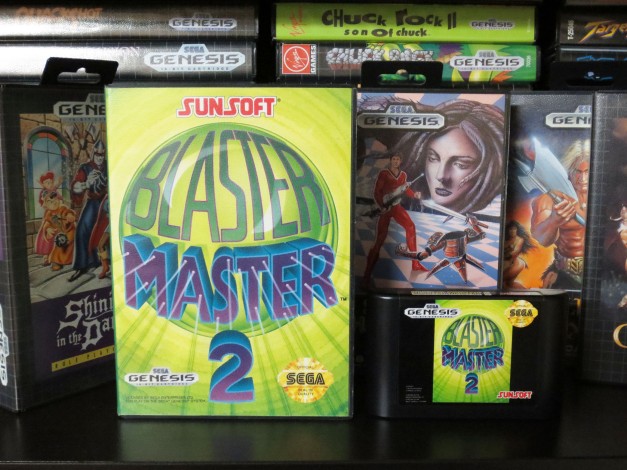 And again another title (Sunset Riders) that seems to command a pretty high price tag at about $100 CAD. **Keep in mind that ebay prices are a premium and should be considered the most amount of money a game might ever be advertised for. So my benchmark is inflated. But since I didn’t pay those inflated prices I am enjoying the comparison 😛 This is also a game that I’ve only discovered relatively recently. It’s in Excellent shape except for ‘Cody B.’ who put his name on the manual cover.

And finally Bubsy. I remember buying this as a kid and being a little bit disappointed because I felt it was not as good as Sonic the Hedgehog. I’m looking forward to revisiting Bubsy and seeing how he’s held up over the years.

There you have it. I traded a lot of games for these eight and I feel good about it. If you consider my estimated value of all the stuff I traded that would mean these games cost me about $22.50 (or $25) CAD each if I had managed to sell them all instead of trading them. Or even less per game if you consider that I’ve been sitting on those Sega Master System games since about 1999 when I started buying them for super cheap.
How much was I paying back then? I really can’t remember for certain but I believe the first 10 complete games I bought cost me $20 total. Yup, that’s $2 each. A few years later I was buying complete Genesis games often for $5 or $10 each. I also traded a lot of my Master System doubles for Genesis games.

So, if Nintendo Joe feels like sharing the secret location of this treasure trove store maybe you too can stop by and make a deal with my new buddy Fred.

But if nothing else, since I now know a guy feel free to tell your peeps that ‘you’ know a guy who knows a guy.

9 comments on “Trading Games at the Flea Market”