During a lunch break last week I popped over to my favorite local video game store just for something to do. The weather was very nice and I wanted to get out.

I was hoping to find a cool Sega Genesis, NES or SNES game but their inventory had not changed much since my last visit and I found nothing… Until I looked up, way up at a shelf right near the ceiling and saw a boxed ATGames Sega Genesis handheld. 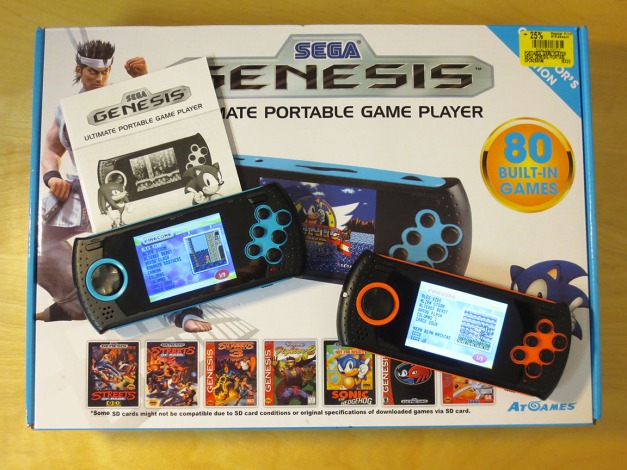 I already had the older orange model and I knew this newer blue version would have a different selection of games. The price was $40 CAD and I decided to pick it up. I discovered that this newer blue model has 40 built in games whereas the orange has 20 built in games. There are some duplicates but the variety is pretty good. Each handheld supports SD cards so really you could be walking around with the entire Genesis / Mega Drive library.

It was interesting to see the original retail price of $80 (when it sold at HMV). And at some point HMV marked it down to $60.

The ATGames Sega Genesis Ultimate Portable Game Player is certainly not ‘Ultimate’ but it is good. The screen and emulation is good enough, the sound is just OK and the battery life is actually amazing. The biggest fault is that this device will not support saving. Any game that has the save option is crippled on this unit. So long as you can come to terms with loading it up with only those games that do not need saving then it really is a very nice way to make your Genesis games mobile.

Just this past weekend my wife and I and a bunch of friends went out garage sailing at a large neighborhood event. Despite not finding much it was a great day and I did find this wonderful 14″ perfect flat CRT TV complete with original remote for $10. It was manufactured in 2005 and it supports composite, s-video and component video. Someday I’ll get around to adding s-video ports to some of my consoles to take advantage the improved video quality.

But! The Sega Genesis still looks pretty good just using composite. I used Space Harrier and Chakan to test the TV when I got it home. 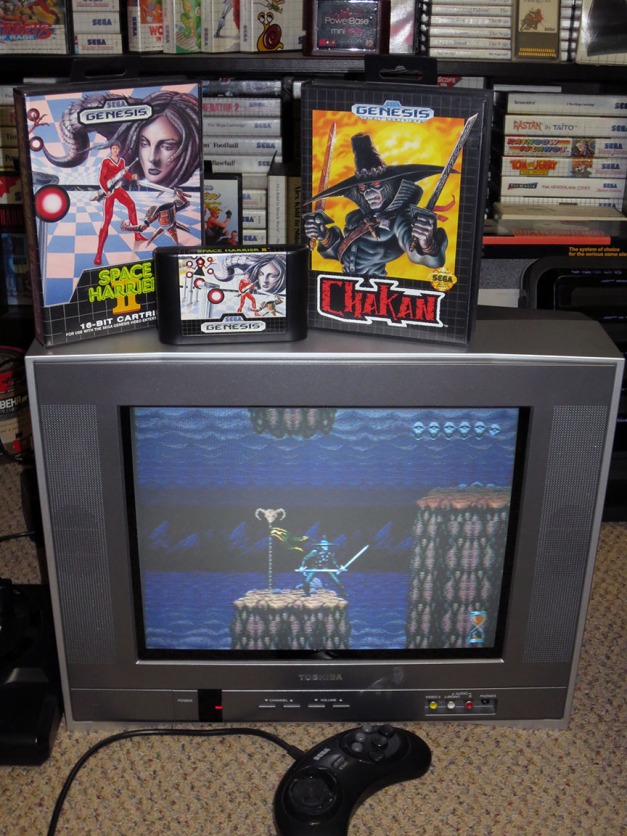 I do have a giant 32″ CRT TV where I do most of my retro video gaming but I plan on finding some small corner somewhere in the house for this new 14″ CRT. Sometimes I loose access to my basement and I’d like to have a backup plan.

Also, during this past weekend Nintendo Joe and I went over to a local video game store called Retro Game Bros. I found a complete and great condition copy of Greendog the Beached Surfer Dude! for $15 and a loose Contra for the NES for $55. 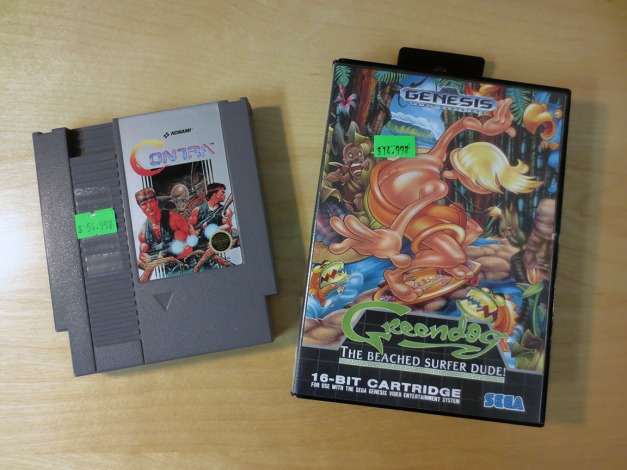 The cost of Contra stung a bit but I do not think I’ll find it for less. Popularity for NES games is just too high these days. This is why I believe my NES and SNES collection will stay relatively small.

Finally, this past Sunday Nintendo Joe and I went to the neighboring city of Waterloo for the Waterloo Game Swap.

I never intended on playing or collecting for the Sega Game Gear (in part because my Game Gear is broken) but over the years Nintendo Joe has continually been giving me Game Gear games that he’s found out in the wild. A lot of these games actually look like really good titles. So when I saw this really nice boxed and complete game gear I decided to see if I could work down the price. I had brought with me a bunch of loose SNES carts. I showed them to the guy selling this Game Gear and I ask for $10 off for every cart he wanted. He ended up taking Wizardry V and Ultima the False Prophet. I added $30 CAD and the deal was done.

What really surprised me at the Waterloo Game Swap was finding complete and really good condition Genesis games that I did not have. This was a nice treat. The three Genesis games below where priced at $50 total. Again I was able to strike a deal and paid the seller $25 and a loose cart of Total Carnage for the SNES.

I wasn’t able to pull off any trades for these NES games. Mega Man 2 cost me $35, Ninja Gaiden II with manual for $25 and Ninja Gaiden for $20. I did offer $30 for Mega Man 2 but that didn’t fly. I came back later after Nintendo Joe said it was a fair price.

So in the end the Sega Dude had a great retro weekend! Hopefully the summer will bring more of this goodness.

My good buddy did significantly better than I did at the same garage sale event. Check out Nintendo Joe’s loot here.

Had any nice finds yourself recently? I’ve love to hear about it!