Not too long ago a very close friend of mine got married (to an awesome woman) and he asked me to be his best man. As if the honor alone was not enough he later told me he wanted to thank me for a fun stag night.
He knows me well so he came up with the idea of getting me a retro video game. He told me to find a game for $100 and he’d pay for it. Normally I avoid paying $100 or more for a video game (I’ve done this twice) because I don’t want to get comfortable with the practice and I really don’t think they’re worth that much.
My buddy liked the idea that he’d be able to get me something that I would love and would normally not get for myself.
I spent a lot of time hunting around on ebay and I found a game that I know always goes for at least $100 or more.
I found a mint copy of Battle Mania which ended up costing $110 USD after shipping.

This game is everything you can hope for in a Japanese title. It has very good and unique art work, it’s a good game and there is no language barrier.

I actually have the Genesis version for Battle Mania which is called Trouble Shooter. I think it’s pretty rare too. Because I do love collecting for both the Genesis and the Japanese Mega Drive I really love having both of these. Specially considering how different the artwork is. And as usual the Mega Drive artwork is much better. Mostly because the Heroines don’t look like 80’s aerobic instructors.

Did anyone notice that in the Japanese Mega Drive version a Super Famicom got totally stomped during the Sega Logo scene? 😀

The only real problem is that I now know there is a Battle Mania 2 and it usually sells for $200 or more! It’s tough business being a collector…

Here is my my excellent Battle Mania in the Collection! 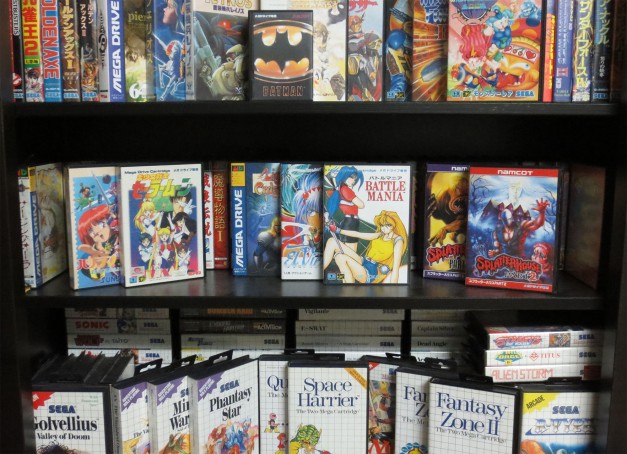 Battle Mania in the Collection