When is rains it pours. I really hope that this is a sign that Sega Genesis games are slowly starting to re-appear out in the wild. I don’t mean the mountain of sports games that never disappeared in the first place; I mean the good stuff.

Sure if you want to pay top dollar you’ll find just about anything on ebay (which I’m still done with by the way) but locally it felt like things had dried up. Until these past few months when I’ve been finding a good handful of complete good condition Sega Genesis games on my local classifieds (Kijiji).

The first two games came from one seller. Both are fighting games. $70 CAD (~$55 USD) total for both Teenage Mutant Ninja Turtles Tournament Fighters and Mortal Kombat 3.

Recently sold listings on ebay.ca showed me that  a complete good condition TMNT Tournament Fighters have been selling for a minimum of $60 CAD (~$45 USD) all in (with shipping and import fees). While Mortal Kombat 3 would have costed me no less than $40 CAD all in (~$30 USD). I was going to include some ebay screenshots for sold listings but at first glance the ebay prices looked good. It’s not until you drill into each individual item and check out the the shipping and import fees where you then see how any value that might have been there is totally snuffed out. This might be a unique problem for Canadian buyers and hopefully US gamers (where most of these items appear to come from) are having a better experience shopping on ebay.

My TMNT Tournament Fighters is in excellent shape. And Mortal Kombat 3 is in good shape. The Mortal Kombat 3 case is a wee bit scratched and I had to re-glue the top of the cartridge label to keep it in place. Admittedly $70 CAD is not amazing. It’s just OK. But I am happy that I managed to do 30% better than ebay’s best. I also like the local pick-up option and having the chance to see games first hand before buying. 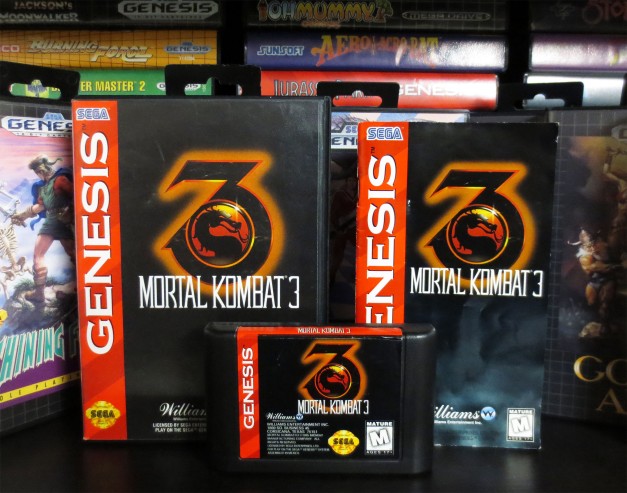 The next two; Herzog Zwei and Thunder Force II are in great shape and I bought them to replace/upgrade the current ones that I already have. They also came from a single seller and in total they cost me $90 (~$67 USD) for the pair.

I really love Herzog Zwei (Duke 2). It just might be the first RTS (Real Time Strategy) game for consoles. With good graphics, amazing music and two player action it really stands out from the crowd. The last time I played head-to-head it was against my good buddy EvilKalman and I totally crushed him 😀 I didn’t say that to his face but he did get monumentally owned.

I managed to record some game time with Herzog Zwei. After all these years this game is still really fun. I picked the level with my favorite tune and cranked the difficulty to Max just to see if I’m still a Top Gun!

*Does anyone see the mistake in the artists interpretation of the cover art for Herzog Zwei? You’ll only ever see a maximum of two fighter jets or two humanoid Mech robots or one of each at any given time. The players (in two-player games) or the player and the AI each control one fighter jet that can transform into a Mech robot. The cover art depicts two of each which wont ever happen in the game. Maybe the artist was expressing the infinite lives the player and AI have as their Fighter-Mech continually gets reconstituted back at base each time they are destroyed. Regardless the cover still looks fantastic.

Aside from both games being awesome their gameplay is very different. Where Herzog Zwei is an over head RTS, Thunder Force II is both an over head and side scrolling shooter. I highly recommend both of them.

I also recorded some gameplay for Thunder Force II which is not a game I played much back in the day. My good friend Nintendo Joe played it a lot when it was new and I remember how good he was. I’m sure I tried it all those years ago but this still felt like a new game to me. It’s a fun shooter. I can see why some people don’t love the over head levels but I didn’t mind them at all. It was good fast action and felt like it complemented the side scrolling levels well.

I’m going to need some practice!

Seeing these games side by side it’s interesting how similar the cover art is for Herzog Zwei and Thunder Force II.

I’ve put my previous copies on my local classifieds for $80 CAD total for the pair. They’re complete and in good shape; just not as good as the above replacements. I’d like to pass along a fair price while at the same time making this upgrade very affordable for myself.