I’ve been spoiled by the super ridiculously amazing longevity of video game cartridges. In all of my hundreds of cartridges from the 80’s and 90’s only two have ever died. These things were built to last and they have already survived the test of time.

However, my very significantly smaller Sega CD collection (standing at 50 games) hasn’t done as well. Three games (Dungeon Explorer, Lords of Thunder and Wolfchild) purchased within the last year(ish) have failed or are showing signs of trouble.

I purchased Dungeon Explorer from Lukie Games in July 2018 for $67 USD (~$88 CAD). When it arrived I found it just would not load at all. When I told Lukie Games about this they were quick to send a replacement. But unfortunately the replacement also did not work. I tried the original and the replacement on two working Sega CD’s so I’m sure the fault is with the CDs. It wasn’t a fun experience but to their credit Lukie Games did refund my money and I got to keep the broken game. 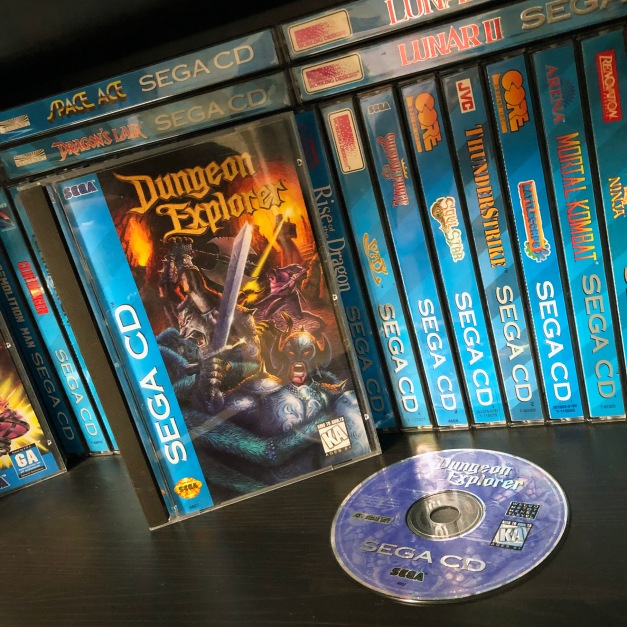 Lords of Thunder works perfectly except it will not play any audio music. The game loads, plays and sound effects can be heard. It’s only the Audio Music that is entirely absent. Lords of Thunder is well known for its intense hard rock music and losing this aspect of the game really steals it’s thunder (see what I did there?).

I bought Lords of Thunder from a fellow member over at Sega-16 in August 2018 for $120 USD (~$155 CAD) and I knew the audio music didn’t work. The seller was straight up about the problem. 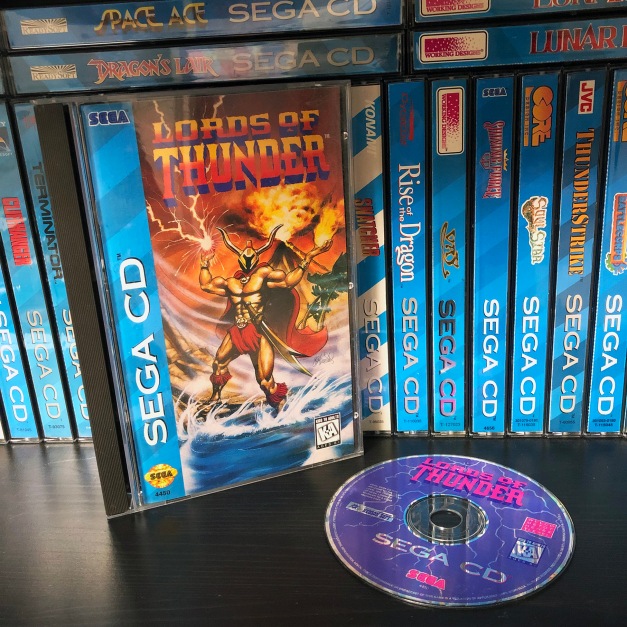 Wolfchild will very reliably fail to load level one. Making it not much better off than Dungeon Explorer which does nothing at all. I purchased Wolfchild from Kijiji for $100 CAD (~$76 USD) just last month.

Fearing that these CD’s might be forever dead or half functional I took them into Retro Game Bros who (as I’ve recently learned) are very skilled at the art of re-surfacing optical discs.

Retro Game Bros had my CDs for just one day. When I returned to pick them up I was told they didn’t have a Sega CD to test if the re-surfacing had helped. But despite this they made some incredibly good predictions.

I’ll cut right to the main event; Lords of Thunder is now working perfectly. And thank goodness for that! It’s by far the most expensive game of the three. Retro Game Bros told me they expected good results from this CD. Before resurfacing they could see some mild scratches and scuffs that they were able to remove.

Dungeon Explorer they were not as sure about. There were a lot of scratches on this disc and the resurfacing actually revealed more scratches. They said maybe… and as it turns out the CD does load and play now. During the intro story the audio does have a hard time transitioning to a new track but it will muddle it’s way through and carry on. So I can’t be certain if the entire game will be playable but it feels entirely possible.

Ironically the Wolfchild CD looks absolutely perfect. With no signs of scratches, scuff or imperfections. Which is why Retro Game Bros were certain that resurfacing will not help. But at my request they tried anyways. No joy. The CD will still freeze trying to load stage one. Wolfchild is likely a victim of disc rot or some such age related degradation that can affect optical media.

If you have any optical discs that are not working or having any kind of trouble I really do recommend having them professionally re-surfaced if a gentle cleaning doesn’t help. Make sure a professional calibre machine and skilled people are at the helm. It’s important and I do believe this is the the last resort to save a disc.

I’m sure it will come as no surprise that I very highly recommend the Retro Game Bros for all of your re-surfacing needs. This has been such a great experience. Even if Wolfchild cannot be saved I still have piece of mind that I tried and… LORDS OF THUNDER WORKS!

For a very long time I’ve mostly ignored Sega’s CD add-on for the Sega Genesis. Known as the Sega CD in North America and the Mega CD for the rest of the world.

Back in the day it came out when my interest in my Genesis was fading (shame on me) and for decades beyond when I got into collecting I put most of my attention on just cartridge games for the Sega Genesis and Sega Master System.

Then in the past year after diving in and getting a chance to try out some really great Sega CD games (Snatcher, Dark Wizard, Popful Mail and Lunar) this add-on hardware that was, in its day, tainted by terrible ‘Full Motion Video (FMV) Games‘ has since won me over.

So much so, that I took some time to take a really pretty picture of it.

I’m going to start by saying the Model 2 Sega CD is just fine. Sure, optical drives are prone to wear out but that being said Sega made a pretty good piece of kit.

I’ve read that the model 1 Sega CD is actually more prone to failure and is harder to find as it had a shorter production run before being replaced by the model 2.

But there is something about the look of the Model 1 Sega CD that I really like. Stacked with a Model 1 Sega Genesis it some how pulls off looking part retro and modern; and combines to make something very unique and just plain awesome.

What did I pay for my very pretty Model 1 Sega CD?

It cost me $240 CAD (~$180 USD). But wait! Just hold on… I can explain. I first saw this exact unit at one of my favorite local retro game shops (Retro Game Bros.) about 6-10 months ago when it’s sticker price was $350 CAD (~$260 USD). It had this steep price tag because it had been fully refurbished. It had the motor and laser replaced in addition to a full capacitors replacement. In fact, I’m told that the laser is a NOS Sega CD laser. The exact model originally used for the Model 1 Sega CD. I don’t know if that really matters but if nothing else it is cool and note worthy.

It’s my hope that this translates into a Sega CD unit that is going to have a very healthy and long life span. And that is easily worth the $40 premium.

I was able to get it for $240 discounted from $350 because of a wildly amazing Black Friday day sale put on by the glorious Retro Game Bros. Thank you guys!

And the steep discounts didn’t stop there. Oh, no… they did not.

There was another item at Retro Game Bros. that I had previously passed up and as fate would have it I found myself staring at it again this past Black Friday.

For $140 CAD they had a good condition Model 2 Sega CD box. Complete with packing and papers, everything except the hardware. I didn’t really want it at $140 but I asked about the sale price and they told me it would be $120 but before I could even blink they offered it up for $100 CAD (~$75). This is what I call a feel good price. Thanks guys! 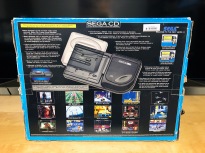 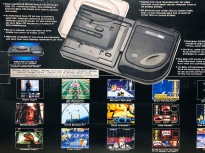 Now my model 2 Sega CD will get packed away in a good condition Sega CD box while my new Model 1 Sega CD becomes the newest show piece for the man-cave. It still needs the Sewer Shark game disc (which wont be hard to find) but otherwise it’s complete.

Here’s a another photo of my New Sega CD along with one of my more recent favorite Sega Genesis games, Tanglewood.

I also bought a very nice Alien Crush for the TurboGrafx-16 from Retro Game Bros. that I already owned and it should have been Devil’s Crush that I bought… but I don’t want to talk about that blunder any longer. Kijiji will fix it.

Don’t forget to head over to see Nintendo Joe at My Nintendo Dimension for his Black Friday Retro Game Bros. scores.

On Saturday June 16th one of my favorite retro video game shops put on a cool summer sale. The main event being 20% off everything. I know Retro Game Bros well and I know they already have good prices so this sale peaked my interest. 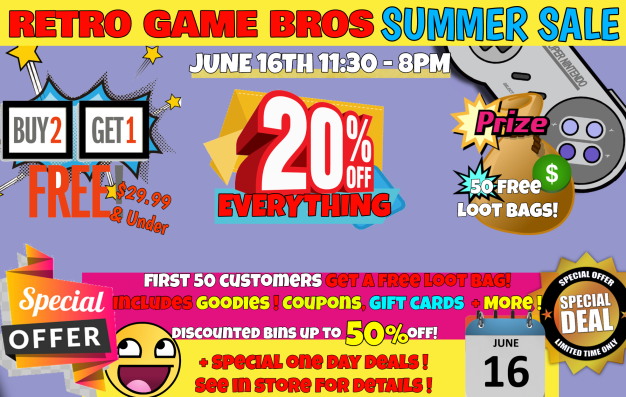 It was a lazy Saturday for me so I left early and arrived at Retro Game Bros about 30 minutes before they opened. I had no expectations in mind so I was surprised to find a line up outside the store. I shouldn’t have been surprised. My home town of Toronto has a huge nerd population and despite waiting about one hour before getting in time flew by as I chatted up fellow retro gamers.

I was number 29 in line (totally scored a loot bag) and because the store can only accommodate a small number of people at a time we had to wait as a handful of people entered and exited in about 10 minute intervals.

I salute those of you who arrived two hours before opening! Whatever you picked up you thoroughly earned.

As for myself (once I got in) all my money was spent after gazing into the very first display case I walked up to.

The Retro Game Bros prices for Dark Wizard and Robo Aleste are the lowest I’ve seen at Retro Stores and local Game Swaps. I’ve come accustomed to seeing Dark Wizard being priced at $80 CAD and Robo Aleste at $200 CAD; despite pricecharting.com showing a complete Aleste for $110 USD (~$145 CAD).

Combine the best prices I’ve encounter with an additional 20% off and things were feeling very good over at Retro Game Bros. Dark Wizard ended up costing me $63 CAD with tax (~$48 USD) and Robo Aleste rang in at $163 CAD (~$123 USD) with tax. 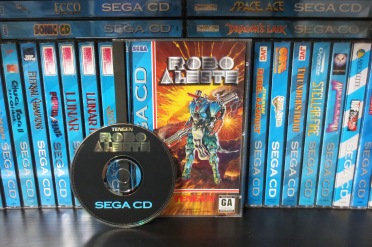 As much as I wanted to continue to take advantage of this one day sale I felt like I had spent enough and it was time to reign it in. I did have my eye on several other items but they will have to wait for another time.